It can get exhausting😓 trying to filter through Google to find a glass smoke pipe to buy. Between the slang, the restrictions, shady websites and bad customer service, it’s no wonder that there is mistrust!

By the way, what the HE🏒🏒 does One Hitter Quitter even mean?

We get it, it’s been a long day, so we made it easy. Just tap a link to jump to a section.

What Does One Hitter Quitter Mean and other Crazy Smoke Terms

There is a lot of slang in the world of smoke pipes. It gets particularly nutty when you travel to different regions of the country and discover they use different terms in the Northeast versus the Southwest. Trees are palm trees in the Southwest, but in the Northeast, you can smoke them. Huh? But, we are going to try and break it down as simply as we can.

One Hitters and Chillums

Let’s start with that immediate question. What does one hitter quitter mean?

First, there are these small discreet straight pipes where a small bowl is located on one end to pack your stash, the other end is the mouthpiece. You hold it and smoke it in a similar fashion as someone would smoke a cigar. These straight pipes are most commonly referred to as one hitters or chillums.

There are different styles of these pipes as well. Some are very plain, relatively thin pipes that can be very discreet. You can even get what is called a metal bat pipe that is painted to look like a cigarette.

If discretion is a top priority and you don’t mind people thinking you're a cigarette smoker, they’re ideal. These pipes are often called taster pipes or most often, one hitters. 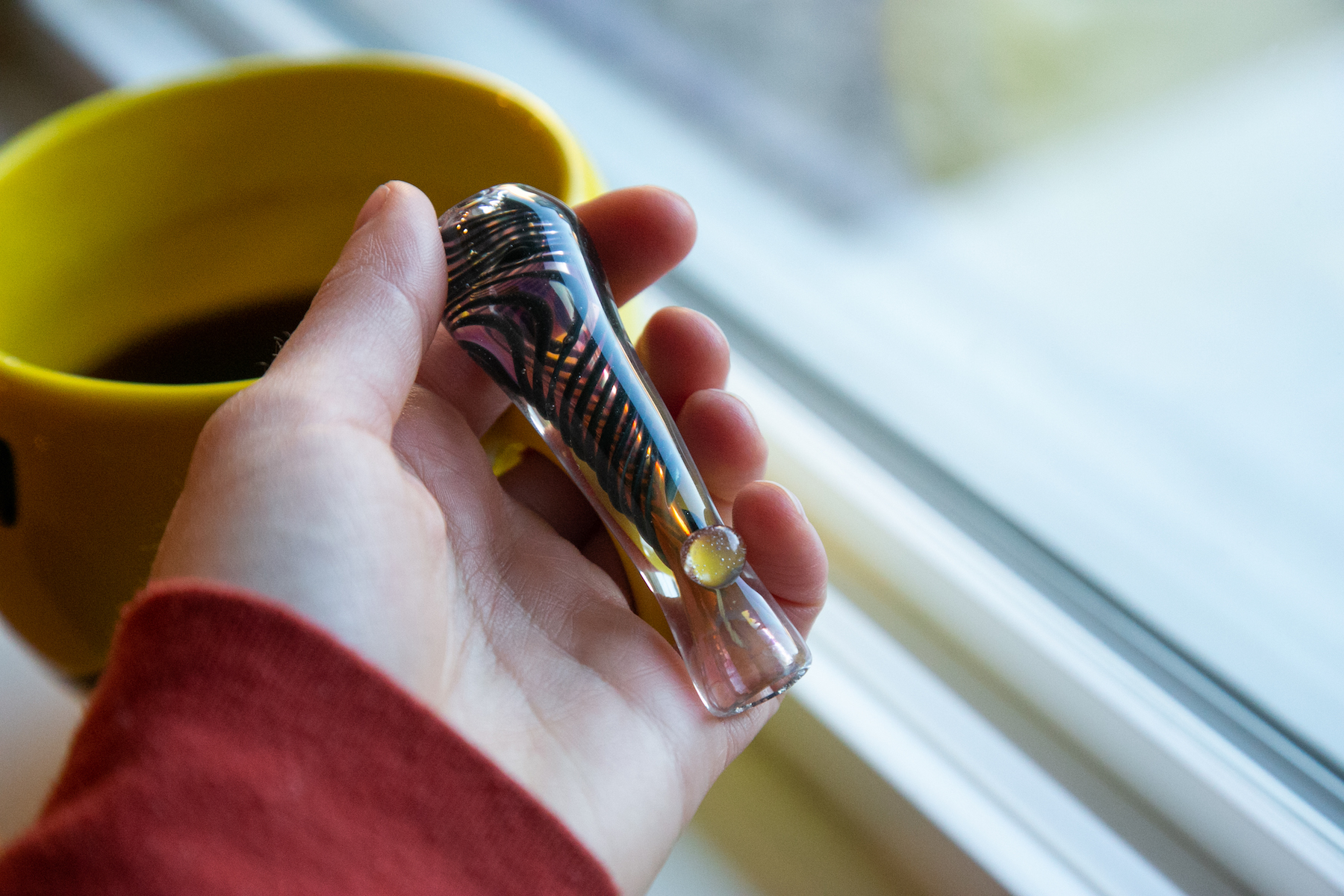 Others, are very colorful pipes, like dichroic glass chillums. They change color depending on the angle of the light. They may have a fluted shape and a bit of a larger bowl with a wider chamber.

While still small, they are a little less discreet than the thin planer pipes, but more stylish. They are intended for personal use, not sharing. When someone is enjoying their dry herbs by themselves, that does not mean they don’t want something nice looking to smoke out of.

One hitter quitter is super slang. It means that the one hitter pipe is for a quick personal smoke session, not intended to be shared with anyone else. Take a quick hit, then put the pipe away, and quit it.

There are typically a few hits in a one hitter actually. But, a super veteran may be able to suck down the whole bowl in one hit, and then they can be crowned a One Hitter Quitter. A big hit, super fast and done.

It’s an ideal skill set if you like to go to public events like a concert where they don’t really want you hitting anything. You need to be fast and discreet in a crowded area, and then get back to the party.

While the term carb is most associated these days with carbohydrates, a biological molecule dieters are afraid will make them gain weight, that is not what the term is referring to when it comes to smoke pipes.

A carb is a small hole on the side of some smoke pipes, such as glass hand pipes, bubblers and sometimes even bongs. When lighting the bowl and inhaling, the smoker will place a finger over the carb hole to block air from going through it.

When the pipe fills with smoke, release the hole to let air flow in and easily inhale the rest of the smoke.

Pack a Bowl; Nope, We Aren’t Talking About a Mixing Bowl

Most people know this. You hardly ever pack mixing bowls to the brim with ingredients. You can’t mix the ingredients then, they will just spill out over the side.

So, packing a bowl applies very specifically to pushing your ground up dried herbs in the glass bowl of a smoke pipe. By using an herb grinder, you can break it up easily and when you pack it into the bowl air should flow through easily so you can enjoy a nice smoke session without any waste.

Scooby Snacks; Yes, We Are Kind Of Talking About the Cartoon

If you ever watched the cartoon, the dog was almost always hungry and his best friend was a suspected smoke pipe enthusiast. If you have ever heard of the munchies before, those two had them all the time. Hence, scooby snacks.😉

We get it. Why does shopping for a nice glass pipe have to be so difficult? It doesn’t. Checkout these short descriptions for smoke pipe categories and where you can buy them.

Bubblers are smoke pipes with built-in bowls like a hand pipe instead of the removable slide like you would see in a bong. There is also a built-in chamber at the bottom for the water where a hollow glass stems extends down from the bowl into the water.

You add water through the bowl so that there is enough water to cover the bottom of the stem. You should just test it by inhaling through the mouthpiece while covering the carb with a finger. If it bubbles nicely and no water gets in your mouth, then you are ready to pack it and smoke.

Craving more bubbler knowledge? ➡️ Learn how how to fill a bubbler with water.

Want to try it out? Buy a bubbler pipe? Just tap the image. ⬇️ 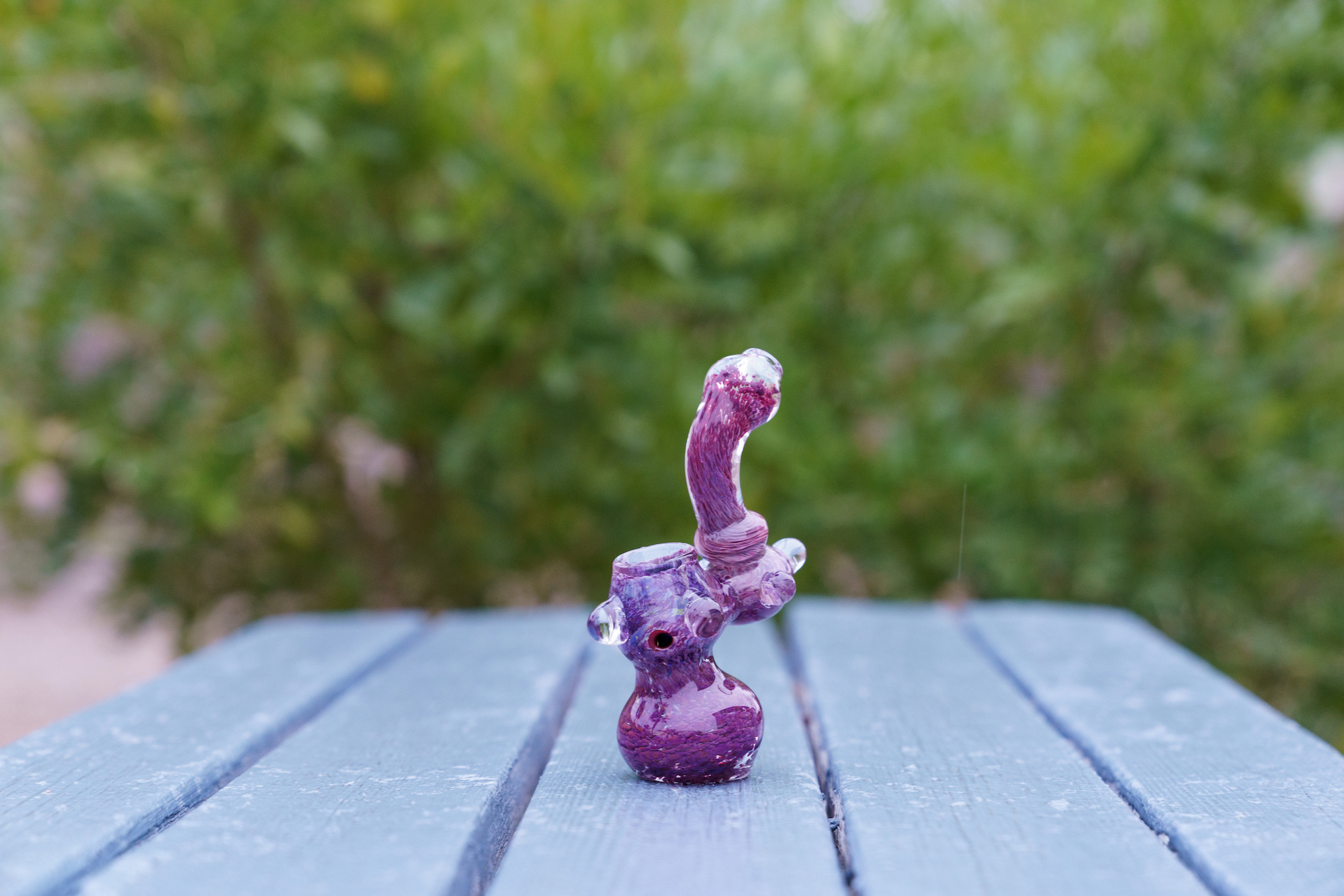 Bongs are also water pipes. They tend to be much bigger than bubblers and are not very portable. The glass bowl is typically removable on a bong to clear the pipe instead of using a carb hole.

A hand pipe is your traditional glass smoke pipe. There is no water, just a big bowl for a big session, a carb and happiness afterwards. Enough said. 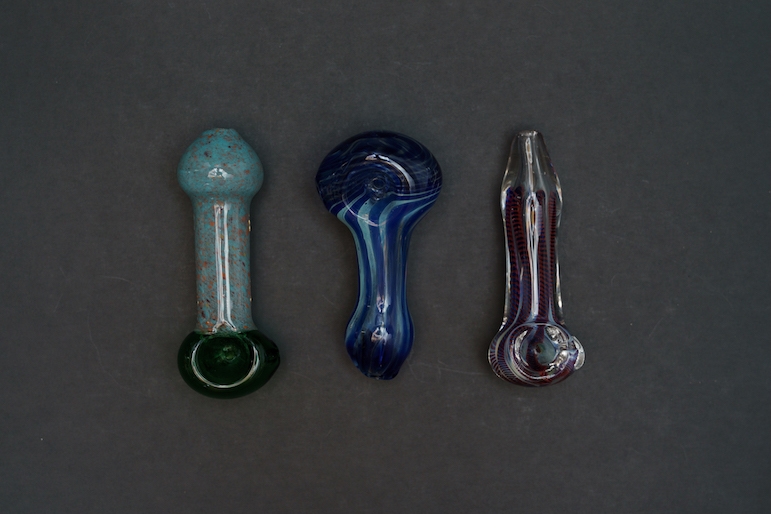 Just jump back up to the What Does One Hitter Quitter Mean section, or tap the link.

If you would like to bolster up your knowledge learn all about glass chillums and one hitters.

A dab rig is serious. It’s a lot like a bong, but they are designed for very powerful concentrates. Instead of lighting a packed bowl, you use a butane torch to superheat something called a banger nail. Once the nail is really hot, you use a steel tool to apply the concentrate to the hot nail. Then smoke away.

Where Can I Buy a Smoke Pipe?

You don’t need to go into a store, but you can. The internet has changed shopping for smoke pipes permanently. There are some great American online smoke shops you can buy pipes at now. You don’t need to have them shipped in from the Ukraine or China.

If you want to walk into a store, head shops still exist but they are as shady as ever. Other than that, you can find some boutique stores in remote parts of the country that may have a small display case full of pipes.

How Long Do Smoke Pipes Last?

A smoke pipe can last a really long time. Some people have been able to hold onto favorites for their whole lives. There are 2 factors that can end the life of a smoke pipe.

Most smoke pipes are made of glass. Like anything made of glass, they can chip, crack or shatter. You could just be very careful by always setting them down carefully and making sure they don’t roll away. You could also buy an extra thick glass pipe like a triple blown glass pipe. But, they are still glass and can still break.

Smoke pipes also begin to fill with black gooey resin after repeated use that can clog them. The solution to that is to simply clean your glass pipe. You can buy pipe cleaners, a simple wiry tool with hard bristles you run through the pipe. You can also boil a glass pipe or immerse it in rubbing alcohol.

Your best bet? Learn everything you need to know about how to clean glass smoke pipes effectively.

All the smoke pipe lingo you hear and read comes from the decades of the illicit market. It’s actually very natural. No plan, just people having fun with something restricted, unregulated and with no rules.

It’s one of the charms of the space and something we shouldn’t be in a rush to get rid of. However, times are changing so you should see the lingo become more mainstream with time.